Hey everyone!  My name’s Matt Oliva and I’m one of the two Photo Archive interns at the Museum this summer. I’m a student at Maryland Institute College of Art where I’m majoring in Art History and Photography.

One of the major projects I have been working on this summer is cataloging and digitizing the Hendler’s Ice Cream Company photography collection. Hendler’s ice cream company was a successful business and household name in Baltimore for fifty years. Their large plant and headquarters is actually only about a block from the museum that acquired their photograph collection.

If there’s one thing I’ve noticed in the time I’ve spent working with the Hendler’s collection, it’s that the company liked to document their advertisements. You could even say that they were obsessive about it, given the hundreds of photographs exclusively of the billboards they put up around Baltimore City, as well as those of other local companies. 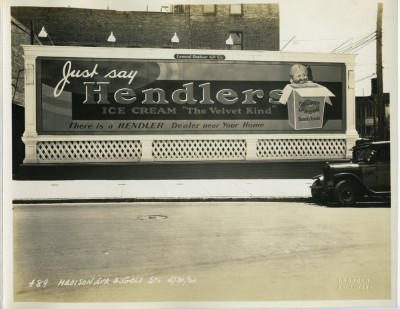 These images are really interesting if you’re like me and fascinated by vintage advertising art and slogans. While these aren’t quite the flashy, famous things that you’ll see in an episode of Mad Men, they’re great examples of how products were sold in the first few decades of the last century.

The billboards are amazing objects themselves; giant, hand-painted images of people and food done decades before ads of this size could be mass produced. The slogans are often rather humorous to modern eyes, particularly those like “not a dessert, a full meal,” “full of fruit, sugar and cream,” and “have a plate a day,” which seem to allude to the healthy nature of ice cream. 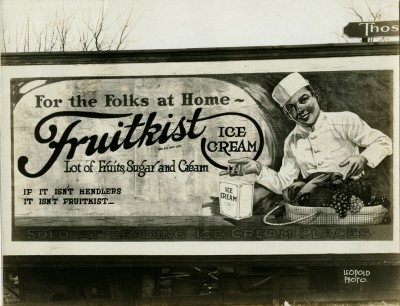 Another interesting facet of the Hendler’s advertising photographs is the way they rather accidentally documented the neighborhoods and shop windows of early twentieth century Baltimore. By hiring professional photographers to document their advertisements on the sides of buildings or displays in store windows, the Hendler’s company also created a record of the everyday side of the city. Most of the buildings, businesses and even blocks pictured in these images have changed so completely in the last eighty of so years as to be unrecognizable. These pharmacies and soda fountains were unremarkable, common features of the city one upon a time, and would have probably been lost to progress without Hendler’s. 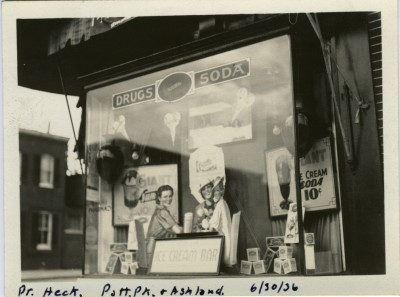