A Visit to Gettysburg and the Seminary Ridge Museum

On the last Friday in June, just ahead of the enormous sesquicentennial crowds, JMM’s education department made a field trip to Gettysburg.  The central purpose of the trip was to gain inspiration for hands-on activities for school groups and families.   We intend to add these experiences to Passages through the Fire:  Jews and the American Civil War, a traveling exhibit opening at JMM on October 13, 2013.  They let me come along for the ride. 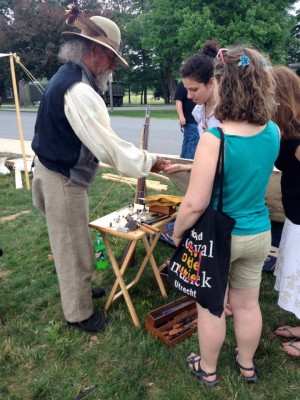 There were conversations with re-enactors, a visit to a sutler (the supplier of re-enactment gear) and one more high point (literally): the Seminary Ridge Museum.  It was a last-minute decision to make this a part of my visit.  Barbara Franco, the director of this new museum, is a treasured friend and colleague.  I had remembered that the Seminary Ridge Museum was opening as part of the Gettysburg commemorations, but from a flyer I suddenly realized that it was in fact 48 hours from opening its doors to the public.  I took a chance and made an unannounced appearance, and Barbara was extremely gracious, taking time from her last minute preparations to offer me a preview of the facility.

The three upper floors of the building tell three stories about three roles that the Lutheran Seminary and specifically this building, Schmucker Hall, played in US History.  The top floor tells the story of July 1, 1863, the day Gen. John Buford went to the cupola atop the building and decided that the Union would take up a defensive position here, determining that this would be the site for one of the most decisive battles of the Civil War.  The floor below tells the story of the Seminary as field hospital, serving the wounded at the end of the battle. 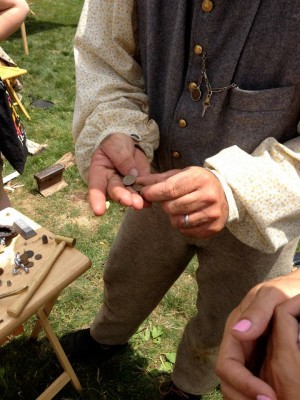 But the lower exhibit floor, entitled “Faith and Freedom”, really intrigued me.  It tells the story of Christian clergy, churches and seminaries in relationship to the struggle over slavery and its abolition.  I had spent a fair amount of time in June looking at the records of the Lloyd Street Synagogue at the outset of the war and re-reading the sermons/writing of Rabbi Illoway and Rabbi Einhorn as the debate over slavery made its way through Baltimore in 1861 (see Todd’s blog post from last Friday).  The parallels in the arguments within the Christian and Jewish community were quite remarkable.  It’s not just that both communities’ leaders cited the same biblical passages to make their respective cases, it’s also that in both communities the argument about slavery became wrapped up in larger theological questions of reform vs. tradition.   Rev. Schmucker’s Lutheran church even had a dispute over the use of English rather than German in congregational rituals that echoes debates in the German Jewish community of the period.

I found the exhibit very thought-provoking and hope to work with Barbara on an exchange of programs during the period when Passages through the Fire is on display here in Baltimore.  In the meantime, if you are headed to Gettysburg for to see the 150th, this is a new feature not to be missed.