A Visit to the MET

While I was home for Passover, we went to New York City to visit the Metropolitan Museum of Art.

We specifically went to see The Steins Collect: Matisse, Picasso, and the Paris Avant-Garde. This temporary exhibition occupies nine galleries on the third floor and is absolutely amazing! Gertrude Stein and her brothers Leo and Michael, and sister-in-law Sarah lived in Paris during the early 20th century. Although they did not have a lot of money, they were interested in purchasing art. They amassed a tremendous collection of works by young, talented, and virtually unknown artists including Pablo Picasso and Henri Matisse.

The Steins hung the works salon-style in their 460 square foot studio in Paris at 27 Rue de Fleurus, represented in a full size at the beginning of the exhibition.  In order to accommodate new acquisitions, they frequently moved and rearranged their artwork. Fortunately, the Steins also took photographs of their various installations. The curatorial team relied on over 400 photographs to curate the exhibition. Eric particularly enjoyed the juxtaposition of the exact paintings that were documented in the large photomurals in each of the galleries. 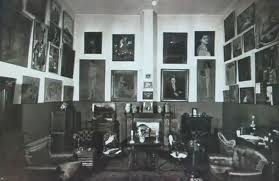 The Steins opened their apartments on Saturday afternoons, allowing visitors to see their collection, shaping art appreciation for future generations. When the Steins found themselves low on funds to buy more art, they would sell pieces of their collection. Clara and Etta Cone of Baltimore were frequent buyers, and thus it was not surprising that several pieces on display were on loan from the Baltimore Museum of Art.   http:///www.artbma.org/collection/overview/cone.html

Picasso’s famous portrait of Stein reminded me of a line from The Paris Wife by Paula McLain where Gertrude Stein plays prominently in shaping Ernest Hemingway’s writing career. In the book Hadley and Ernest wonder, “How much do you think Gertrude’s breast weigh?”  My father used the audio tour and found that it provided more information than the text panel about the rift between Gertrude and Leo. 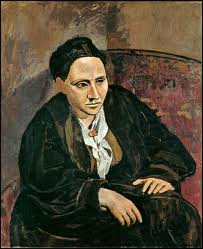 After the signing exhibit me I’ll when I separate ways and explore different parts of the museum. My dad was enthralled with the painting of Napoleon at battle.  http:///www.metmuseum.org/Collections/search-the-collections/110001498

Eric spent two more hours in the hall of armor.

My sister and toured the American Period Rooms –installations of original furnishings and structures from of the most impressive homes in the country. My sister was particularly taken by and tables and other large furniture created by the Harter brothers, well I enjoyed paintings by Thomas Dewing, Tiffany lamps and Frank Lloyd Wright’s Prairie style home.

We all enjoyed the temple of Dendur installation – an actual in Egyptian temple that was saved in 1965 before the Nile River was intentionally flooded.

As you can see, even if you don’t have a free pass, the museum is well worth it! 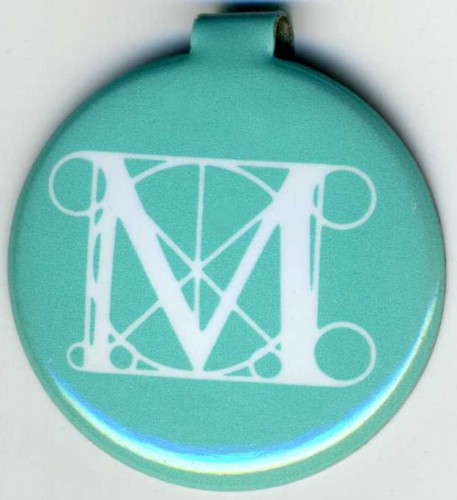 With the current controversy about Gertrude Stein and after the Edward Burns’s answer it is interesting to Know one of the last Gertrude Stein’s vew before dying when she speaks about art it is also politic .

Stein’s preface to the exhibition by Francisco Riba Rovira at Roquepine Gallery in May 1945:
« It is inevitable that when we really need someone we find him. The person you need attracts you like a magnet. I returned to Paris, after these long years spent in the countryside and I needed a young painter, a young painter who would awaken me. Paris was magnificent, but where was the young painter? I looked everywhere: at my contemporaries and their followers. I walked a lot, I looked everywhere, in all the galleries, but the young painter was not there. Yes, I walk a lot, a lot at the edge of the Seine where we fish, where we paint, where we walk dogs (I am of those who walk their dogs). Not a single young painter!
One day, on the corner of a street, in one of these small streets in my district, I saw a man painting. I looked at him; at him and at his painting, as I always look at everybody who creates something I have an indefatigable curiosity to look and I was moved. Yes, a young painter!
We began to speak, because we speak easily, as easily as in country roads, in the small streets of the district. His story was the sad story of the young people of our time. A young Spaniard who studied in fine arts in Barcelona: civil war; exile; a concentration camp; escape. Gestapo, another prison, another escape… Eight lost years! If they were lost, who knows? And now a little misery, but all the same the painting. Why did I find that it was him the young painter, why? I visited his drawings, his painting: we speak.
I explained that for me, all modern painting is based on what Cézanne nearly made, instead of basing itself on what he almost managed to make. When he could not make a thing, he hijacked it and left it. He insisted on showing his incapacity: he spread his lack of success: showing what he could not do, became an obsession for him. People influenced by him were also obsessed by the things which they could not reach and they began the system of camouflage. It was natural to do so, even inevitable: that soon became an art, in peace and in war, and Matisse concealed and insisted at the same time on that Cézanne could not realize, and Picassoconcealed, played and tormented all these things.
The only one who wanted to insist on this problem, was Juan Gris. He persisted by deepening the things which Cézanne wanted to do, but it was too hard a task for him: it killed him.And now here we are, I find a young painter who does not follow the tendency to play with what Cézanne could not do, but who attacks any right the things which he tried to make, to create the objects which have to exist, for, and in themselves, and not in relation.
This young painter has his weaknesses and his strengths. His force will push him in this road. I am fascinated and that is why he is the young painter who I needed. He is Francisco Riba Rovira. »
Gertrude Stein


Perhaps you have something to tell about when Gertrude Stein tells us on Cezanne, Riba-Rovira, Matisse, Picasso, Juan Gris…

Because why did she help Riba-Rovira ?

Was she only fascinated by his art ?

Was it a politic mistification and manipulation to make on his back a new vitginity for her…
Because as she tells ,he was persecuted by the nazi .Certainly arrested after “sabotages” in coke working in St Etienne ,if he would not escape from Vannes in a transit camp where the ss wera from Holland he would be send to Mathausen as a red and republican spanish .
But in all that when we saw in the Met the portrait of Gertrude Stein he did we can read in his way of painting a kind touch of something hieratic ,very straight ,as you must to be after beeing down .
All his life fighting the faschism as with Picasso when they did the book to support coke miners in the Asturies who were on stricke in in the sixties …

Dear  ,
they are right looking for the historic truth about Gertrude Stein in this however wonderfull exhibition,”The Steins Collect;Matisse,Picasso,Cezanne and the Parisian Avant Garde” in NewYork at the Metropolitan Museum of Art .
Because what a pleasure to see the portrait of Gertrude Stein by Riba-Rovira .Who was as Picasso an antifascist and antinazi artist .Persecuted by Franco and the Nazis .
But who is perhaps in this exhibition ,thanks to Rebecca Rabinow and Edward Burns ,
the only one artist would fought them weapons in his hands .
Whose father was in jail after the spanish civil war .Beside Tchelitchew and Balthus and Francis Rose near Picabia and Picasso in the last room of this exhibition .

And you have an interesting article in Appollo London Revew about him .And also in Artes Magazine from San Francisco where the exhibition was before .The main document is with the mention beside the picture with the Preface Gertrude Stein wrote for his first Riba-Rovira’s exhibition in the Galerie Roquepine in Paris on 1945 .
Where we can read Gertrude Stein writing Riba-Rovira “will go farther than Cezanne…will succeed in where Picasso failed…I am fascinated ” by Riba-Rovira Gertrude Stein tells us .

And you are you also fascinated indeed as Gertrude Stein by Riba-Rovira ?

But Gertrude Stein spoke also in this same document about Matisse and  Juan Gris .
And we learn Riba-Rovira went each week in Gertrude Stein’s saloon rue Christine with Masson ,Hemingway and others.By Edward Burns and Carl Van Vechten we can know Riba-Rovira did others portraits of Gertrude Stein .

But we do not know where they are ;and you do you know perhaps ?

With this wonderful portrait we do not forget it is the last time Gertrude Stein sat for an artist who is Riba-Rovira .
This exhibition presents us a world success with this last painting portrait before she died .And her last Gertrude Stein’s Art Retrospective before dead .
Both ,it is one of the last text where she gives her last art vision .As a light over that exhibition now at the Metropolitan Museum of Art of New York thanks to Curator Rebecca Rabinow .
Coming from San Francisco “Seeing five stories” in the Jewish museum to Washington in National Portrait Gallery .And now in the Metropolitan Museum of Art of New York for our pleasure .
And the must is to see for the first time in the same place portraits by Picasso, Picabia, Riba-Rovira, Rose ,Tall-Coat, Valloton .Never before it was .
You have the translate of Gertrude Stein’s Riba-Rovira Preface on english Gertrude Stein’s page on Wikipedia and in the catalog of this Roquepine exhibition you can see in first place the mention of this portrait .And also other pictures Gertrude Stein bought to Riba-Rovira .
There is another place where you can see now Riba-Rovira’s works in an exhibition in Valencia in Spain “Homenage a Gertrude Stein” by Riba-Rovira in Galleria Muro ,if you like art …

But we do not missed today that all over Europe a very bad wind is blowing again bringing the worth in front of us .And we must know that at least were two antinazis and antifascists in this exhibition but the only one fighting weapons in hands was Riba-Rovira and also who did one of the first three « affiches » supporting Republicans in the beguining Spanish civil war .
Picasso fighting also but only with his brushes .