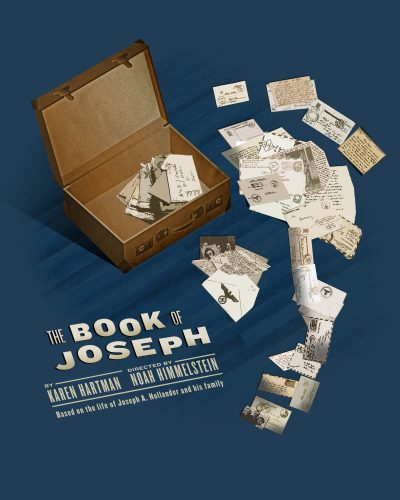 Giving Voice to the Hollander Family

Spring 2018 Everyman Theater will premiered a new play, The Book of Joseph, based on a memoir of Baltimorean Richard Hollander, Every Day Lasts a Year: A Jewish Family’s Correspondence from Poland.  Working with both the production company and the author, the Jewish Museum of Maryland created a companion exhibit featuring original Hollander family letters and artifacts central to the story of the play.

It began with a suitcase…

A chance discovery of a suitcase in an attic filled with letters written in a foreign language and stamped with swastikas led Richard Hollander on a journey to uncover his family’s history. Unbeknownst to Richard, while his father had fled Poland prior to World War II, the rest of his family was trapped. The letters, written in German and Polish, document the increasing danger that the family faced as they struggled to stay together and to find refuge in another country. They also shed light on his father’s difficult experiences gaining asylum in the US once he arrived in New York. The extensive correspondence that he unearthed tell a remarkable – and ultimately tragic – story of one family’s resilience and love for one another set against the turbulent backdrop of the Holocaust and World War II.

Photos of Exhibit in JMM lobby

The Book of Joseph exhibit at JMM was made possible in part by the generous support of:

The Kutler Family Philanthropic Fund, in memory of Hannah and Gus Rath