Included with Museum Admission – Get Your Tickets Now 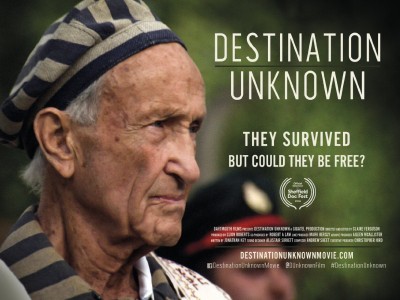 Twelve survivors, twelve families torn apart by the Holocaust, twelve people striving to build a new future after the war.

Blending unique and intimate testimony with immersive archive, DESTINATION UNKNOWN  unveils the human stories underlying the events of the Holocaust. These include one of the few escapees from the terror of Treblinka, and an exclusive interview with Mietek Pemper, who helped Oskar Schindler compile his List.

The film traces the narrow paths to survival, whether in hiding, fighting as partisans, or through enduring the camps such as Kraków-Płaszow, Mauthausen and Auschwitz-Birkenau. While a few managed to escape, most had to try to find a way to stay alive until the end of the war.

Their stories do not end with liberation. We see how they had to survive the chaos that came afterwards, and their attempts to build new lives. Read More.

Additional Films in the Series Include:
No Asylum, May 2nd
Steven, May 9th