Refugees and America: Past, Present, and Future 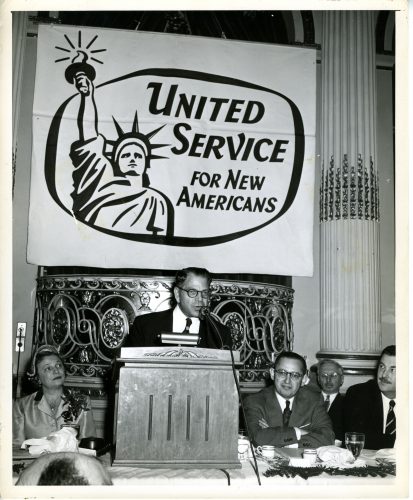 Help us mark UNESCO International Holocaust Remembrance Day as Mark Hetfield of HIAS and Anne Richard, former Assistant Secretary of State for Population, Refugees and Migration in the Obama Administration, discuss immigration in American, past, present, and future.

Mark Hetfield, with 29 years of expertise in the refugee field, is President & CEO of HIAS, the world’s oldest organization dedicated to refugees (founded in 1881). A global agency guided by Jewish values that assists and resettles refugees of all faiths and ethnicities, HIAS was only national  refugee resettlement agency to file a court challenge against the Trump Administration’s attempted Muslim and refugee ban.

Anne C. Richard served as Assistant Secretary of State for Population, Refugees and Migration in the Obama Administration (2012-2017).  Previously, she was Vice President of Government Relations and Advocacy for the International Rescue Committee.  In addition to the State Department, she served at Peace Corps Headquarters and the US Office of Management and Budget earlier in her career.  She has enjoyed fellowships from the Council on Foreign Relations and the Robert Bosch Stiftung. Ms. Richard is a graduate of Georgetown University’s School of Foreign Service and has a Master’s degree in Public Policy Studies from the University of Chicago. Since leaving office in January 2017, she has taught at Georgetown University and been a visiting fellow at the University of Pennsylvania’s Perry World House.

Image from the JMM Collections: Black and white photograph of Harry Greenstein (speaking at podium) at the annual meeting of United Service for New Americans (USNA) in New York City, March 1954. JMM 1971.020.247.