Mel Brooks and the Power of Parody 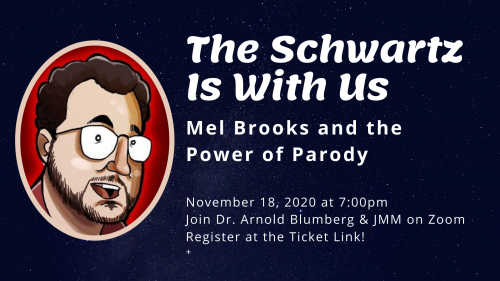 By the time he wrote, directed, produced, and starred in SPACEBALLS (1987), Mel Brooks had already established himself as one of the foremost comedic voices of his generation – a voice uniquely shaped by his delightfully satirical Jewish perspective on life. Dr. Arnold T. Blumberg takes a look at the career of Mel Brooks and the ways in which his Jewish heritage and sensibilities fueled his meteoric rise to the top of the comedy hierarchy, as well as the many well-judged jabs SPACEBALLS aims at all the familiar tropes of the science fiction genre, giving us one of pop culture’s looniest looks at “Jews in Space.”

Dr. Arnold Blumberg is an author, editor, book designer, educator, and pop culture historian. He has taught writing, literature, and media literacy courses, with special focus on topics such as zombies, superheroes, and comic book history. He recently authored Journey of the Living Dead, a look at 100 years of zombie cinema, and is currently working on a three-volume series examining the first ten years of the Marvel Cinematic Universe. His small press publishing company can be found online at www.atbpublishing.com.

This live stream Zoom event is presented in relation to the special exhibit Jews in Space: Members of the Tribe in Orbit, on view September 13, 2020 through April 11, 2021.