We Count: Why Numbers Matter in Our Communities 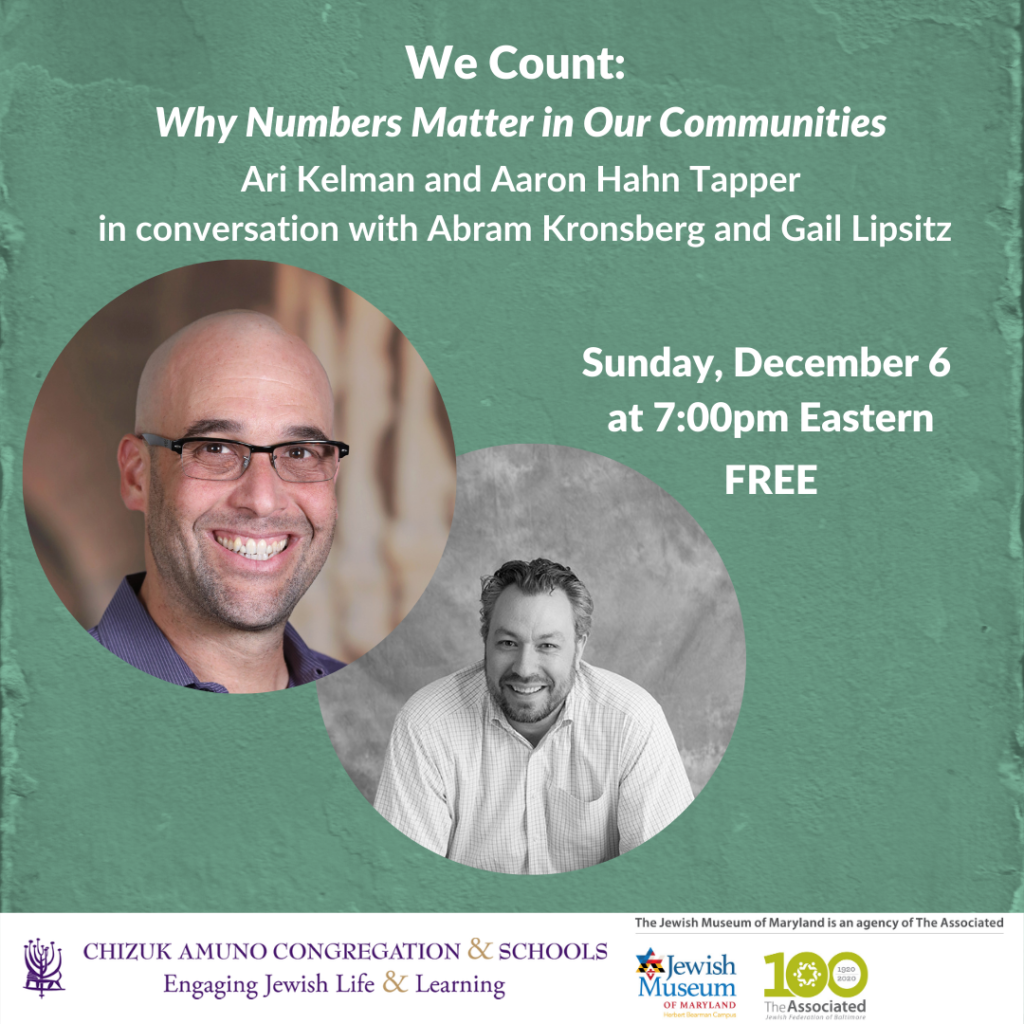 Join professors Ari Kelman and Aaron J. Hahn Tapper for a discussion of the importance and challenges inherent in population studies of Jewish communities, particularly for Jews of color.

This program will also stream live on our Facebook page.

Ari Y. Kelman is the inaugural holder of the Jim Joseph Professorship in Education and Jewish Studies in the Stanford Graduate School of Education, where he is the director of the Concentration in Education and Jewish Studies and serves as the Director of the BJPA @ Stanford.  He holds a courtesy appointment in Religious Studies, and is a faculty affiliate of the Center for Comparative Studies in Race and Ethnicity, and the American Studies Program.

He is the author of a few books about American Jewish life and culture, including Station Identification: A Cultural History of Yiddish Radio (University of California Press, 2010), and Shout to the Lord: Making Worship Music in Evangelical America (NYU Press, 2018).  He is also the co-editor of Beyond Jewish Identity (Scholars’ Press, 2019), and is the co-editor of the journal Jewish Social Studies.  He is also the author of a number of reports about American Jews, exploring issues like antisemitism and race. His research explores the forms and practices of religious transmission, and it has taken him to church, to Krakow, Poland, to many many b’nai mitzvah, and deep into the archives of religious music of the early 1970s.

Aaron J. Hahn Tapper, the Mae and Benjamin Swig Professor in Jewish Studies and the founding Director of the Swig Program in Jewish Studies and Social Justice, has been at USF since 2007. An educator for more than two decades, his primary academic interest is the intersection between identity formation, social justice, and marginalized groups.

Aaron completed his PhD in the Religious Studies Department at the University of California, Santa Barbara, where he studied the History of Religions, the Sociology of Religions, Nonviolence and Religions, Politics and Religions, and Modern Islamic Movements. His Dissertation focused on the relationship between power, the sociopolitical context of Israel and Palestine, and Jewish and Islamic religious law (halachah and shari’a, respectively). He also received an MTS from Harvard Divinity School, where he focused on World Religions, and a BA from Johns Hopkins University, where he majored in Psychology.

In 2003 he founded Abraham’s Vision, a conflict transformation organization that ran educational programs within and between the Muslim, Jewish, Palestinian, and Israeli communities, for whom he served as Co-Executive Director through May 2013. Currently, he is the Executive Director of the Center for Transformative Education, an educational initiative aiming to create empowering educational programs to transform societies into their potential, which he co-founded in 2008.

Abram J. Kronsberg is a congregant of Chizuk Amuno Congregation and a member of the Board of Trustees of the Jewish Museum of Maryland.

Gail Lipsitz is a literature teacher and writer.  She was coordinator of marketing and community relations at Jewish Community Services for 27 years.  Her son David is a graduate of Krieger Schechter Day School.