Sukkot may have been over for the rest of the world last Thursday night, but at the JMM, it was still in full swing! As part of our Brooze & Schmooze event series for young adults, we held the second of what I hope will be many more Iron Chef competitions. The first Iron Chef competition here was held during Passover and featured horseradish as the secret ingredient; this time around, our secret ingredient was whatever seasonal produce Kayam Farms had on hand, which I thought fit nicely with the Sukkot, the harvest festival, theme.

For those of you who are unfamiliar with the food channel competition show “Iron Chef,” a little explanation is in order. The original series involves two teams, each headed by a celebrity chef, who compete for the ultimate title of “Iron Chef” by cooking a three course meal in one hour that utilizes, in each course, a surprise ingredient that is only revealed at the last minute.

In our version, we had four teams: Team “BIYA” (B’nai Israel Young Adult); Team “Kayam” (they swear they didn’t know the secret ingredient beforehand!); Team “Honey Jew Jew”; and, the defending champions from Iron Chef: Passover, Team “The Still Very Last Minute Goyim.”  We provided all of them with all the equipment and food materials they were allowed to use (which included a very heavy pumpkin), and we required that they cook only two dishes–one savory, one sweet–with the secret ingredient.

One minute before their time began, Elena announced the secret ingredient of the night: Winter Greens! (Collard green, kale, mustard greens, etc.)  And the race was on! 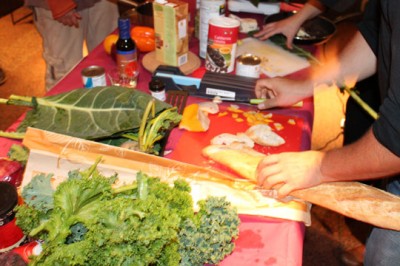 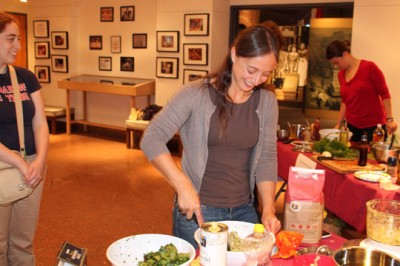 All four teams came up with some very creative dishes–though a couple of them were more creative than tasty. These dishes ran the gamut of mustard greens falafel (one of my personal favorites from the night); a mixed vegetables salad served on large kale leaves; and sweet “dolma” made with nuts, date syrup, and wrapped in collard leaves. 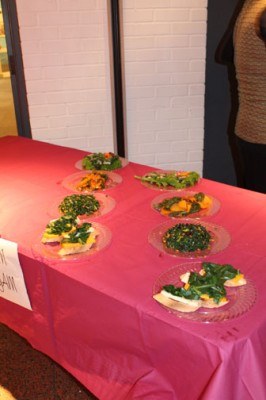 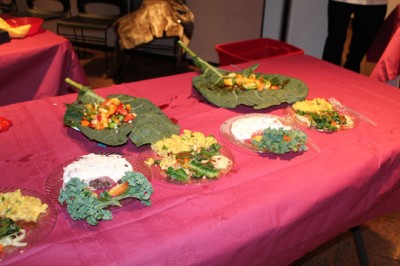 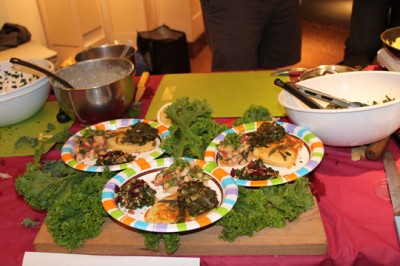 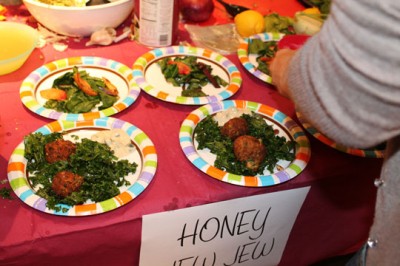 By the time our three judges were ready to make their rounds to all the teams’ tables, there was a lot of built up suspense, anticipation, and hunger! The teams were judged according to creativity, aesthetics, and, of course, taste. Once the judges had each had their tastes, all of the spectators were allowed to try the dishes as well. 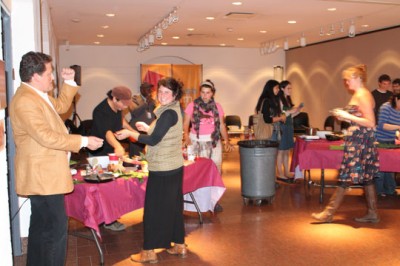 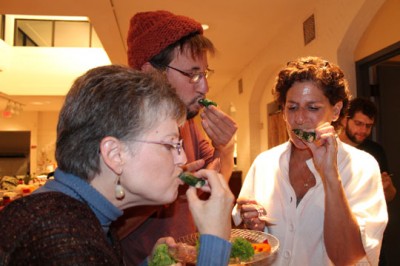 In the end, though it was a close call, Team “Kayam” won first place, with Team “The Still Very Last Minute Goyim” in second; Team “Honey Jew Jew” in third, and Team “BIYA” in fourth.

We all had a great time putting on this event, and it looked like our participants had as much fun as we did!