I’ve long been fascinated by the beautiful tiles of the MahJongg set, but I’ve never had the patience to sit down and learn the rules. Will 2012 be the year that I learn how to play?

A few months ago I was catching up with my hometown friend Vivian. With the last names Ng and Okin, we were together in alphabetical homeroom throughout high school, and there was plenty to catch up on at our reunion. I asked about her family and she mentioned that her mother was playing MahJongg. Excitedly I asked, “Is your mother Jewish?” Vivian looked at me like I had lost my mind—or hadn’t ever met her mom—and said “She’s Chinese.” Right! I knew that. Somehow I had forgotten that MahJongg is a traditional Chinese game and not a specifically Jewish game.  Since it’s about a 4 hour drive back to Ringwood, I decided NOT to ask Vivian if her mother would teach me how to play the game.

A few years ago former JMM Curator Melissa Martens curated “Project Mah Jongg” at the Museum of Jewish Heritage. Her exhibition text explained that May Jongg was “introduced to American audiences by Joseph P. Babcock who began importing sets en masse around 1922, the game delighted players with its beautifully adorned tiles, associations with other lands, and mysterious rules…. In the post-war years, the game was embraced enthusiastically throughout circles of Eastern European Jewish women and became a favorite activity of bungalow colonies of the Catskills. Mahjongg became an entertainment ritual in suburban Jewish homes—where it has been lovingly transfixed in the memories of the contemporary generation. Today, hundreds of thousands of people play mahjongg, and it continues to be a vital part of communal, personal, and cultural life.” [http:///projectmahjongg.com/about.html]

The exhibition was beautiful and delightful, but I didn’t have enough time to sit down and learn the rules. Check out this slide show of others playing MahJongg.

Then last week at our Collections Committee meeting Board Member Irene Russel mentioned that she plays MahJongg with her girlfriends every Tuesday night. I practically invited myself over to play!

Instead, I think I will come to the JMM on Christmas Day for our event Chanukah, Christmas, and all things Chinese and learn the basics. I hope to see you there. 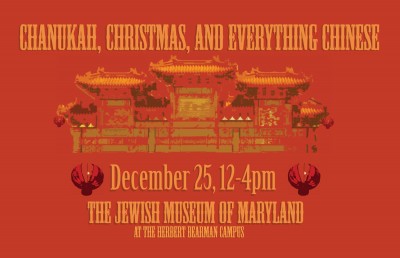