Tennis, Everyone! was a joint program with the Myerberg Senior Center.  The program was based on a documentary and exhibit about African Americans who fought to integrate Druid Hill Park’s clay tennis courts in the 1950s and 60s.  The program was sponsored by Baltimore City Department of Recreation and Parks – Senior Citizens Division.

In addition to watching part of a short documentary, which interviewed African Americans who recalled playing tennis during the integration of the courts, Harriet Lynn moderated a discussion with three guest speakers.

Jean Powell never really played tennis, yet she was known as the mother of tennis in Baltimore.  She worked for the city for many years, helping to create mobile tennis programs that made use of the many public courts in parks and at schools around the city.  City children could learn the sport and take part in summer and afterschool programs.  It took a bit of pushing to convince the city to invest in tennis.  It is easier, she noted, to put a basketball court in a park or school playground, but, she was convinced that a tennis court could reach as many children with perhaps a more powerful impact.  Powell recalled collecting barely used tennis balls from country clubs around the area and getting generous donations of racquets from Goucher College.  Two of the children impacted by Powell’s tennis program went on to become local pros at clubs in the area.

Sharon Pusin and Chuck Abelson are Jewish Baltimoreans who grew up near Druid Hill Park playing tennis on the courts.  Sharon shared newspaper clippings, pictures and trophies from her competitions.  She remembered having African American doubles partners who were not allowed to compete at some tournaments with her and that she, as a Jewish player, was also discriminated against at some tournaments.

Chuck Abelson never planned to become a tennis player.  He was a child growing up near the park for whom summers meant relaxing and playing with friends around the lake and at the zoo.  One day while goofing around on the tennis courts, he met Maurice (Maury) Schwartz, a local tennis pro and teacher to many.  Maury offered young Chuck the chance to study tennis from him if he was willing to be dedicated and spend his hours practicing.

Tennis, all of the speakers at the event noted, is a sport that requires focus and teaches skills that are applicable in other aspects of one’s life.  Yet for many African Americans in Baltimore and around the country, it was difficult to even have the chance to compete.  The American Tennis Association, founded in 1916 in Washington, DC, is the oldest African American sports association in the country.  It was founded at a time when the United States Lawn Tennis Association (USLTA) excluded blacks.  The first ATA National Championship was held in 1917 at Druid Hill Park, which maintained white-only and black-only courts.  The USLTA (later renamed the USTA) was desegregated in the 1950s.  As for the exact date that the courts at Druid Hill Park were desegregated, none of the speakers seemed to have a specific date.  The famous clay courts were torn down sometime in the 1970s.  Today the ATA continues to promote tennis within the African American community. 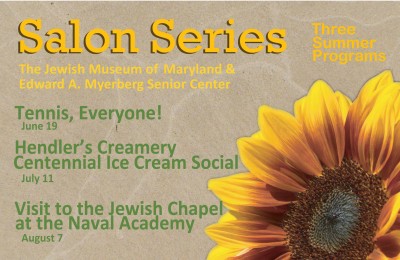 This event was the first of a three part Salon Series.  Join us for a Hendler’s Centennial Ice Cream Social on Wednesday, July 11 from 1:30 – 3pm at the JMM and don’t forget to sign up for the bus trip to the Jewish Chapel at the Naval Academy in Annapolis on Tuesday, August 7th.  Spaces are filling fast. 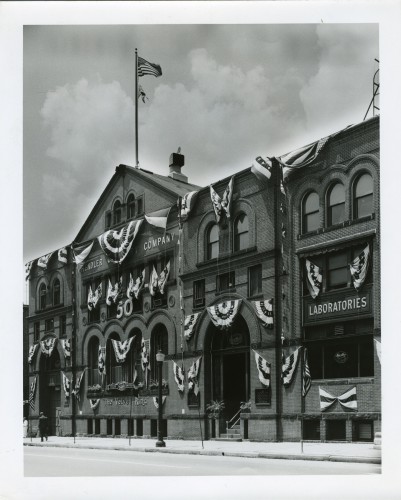 For more information about these programs and others contact Program Manager, Rachel Cylus