I grew up with a family club like the one portrayed in the movie Avalon….with one important difference:  the Pinkert Family Club was made up exclusively of my grandparents, their children and the spouses of their children.  My dad had 10 brothers and sisters who survived to adulthood and this proved to be more than enough to create a stable club with a President, Treasurer and Secretary.

From the end of World War II until the late1960s, they met about once a month to settle matters of important family business (like allocating gifts, planning parties and holiday events) and to tease each other.  The eldest brother, Uncle Joe, held the permanent post of President and for most of these years my mom (an in-law!) was the sarcastic Secretary.  This is how I came to inherit the minutes of the meetings, my most prized archival possession.

While my parents’ generation was not nearly as prodigious as my grandparents, the family expanded rapidly.  I have 56 first cousins, counting spouses.  The growth of the family was a frequent topic of the club’s meetings as seen in these minutes from April, 1952 – a meeting which began with an electoral contest about who in the room might be pregnant:

Meeting was called to find out who was the proud stockholder of the latest dividends.  A vote was taken and Florence barely made it by three votes.  Her husband Al may be on the sorta quiet side and “ztu di ztoris” a TV addict – but he does get things done (in due time)

Old business was the discussion of the last Seder at Rodfei Zedek.  Everyone thought it was nice – especially for the children – but next year we would like to have a more private one.

New business was Marshall Patinkin’s Bar Mitzvah gift… a portable radio was decided upon and Irv was appointed to purchase it and have it sent to him.  Mother’s Day Gift – Mae, Lottie and Naoma were appointed as committee to take care of same.

Flash – our President – brother Joe – was accepted into the Quadrangle Club.  Mae announced donation given to ORT in honor of Shirley Lennon’s farewell party.

Meeting ended with snack by host and hostess.

Attached to the minutes is the actual vote tally.  As “Mother” (my grandmother) was well past sixty at the time, I think we can conclude that those votes weren’t serious. 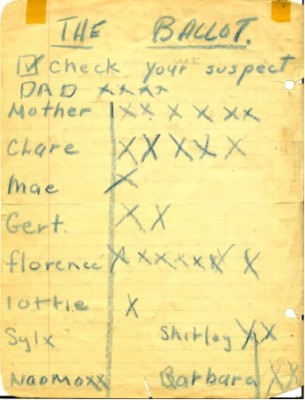 I chalk this up as my first electoral victory.  I am living proof that the right candidate was selected.  Next Tuesday I will celebrate the 60th anniversary of the successful outcome.

Wonderful post! I love how this vignette brings us a little slice of history and culture and paints a vivid picture with a few pencil marks on a page. I hope you had a great birthday.

Hello Marvin . I am one of your 56 first cousins, first born of your aunt Naoma and uncle irv, more memorable perhaps as “Leslie Ann”

I was interested to hear about your amazing career, but more importantly, the notion that you are in possession of the Pinkert Family Club Archives is amazing.
Would it be possible for you to share what you know about the club (even the dates of its existence were not known to me.) and of course, the minutes themselves are sure to be fascinating . My email is entered on this form and I would love to hear from you. Regards, Leslie (Ann)