The voyage of a fish

Gefilte Fish is rarely served for breakfast.  Some might even say, nine o’clock in the morning is too early for fish in general.  But, on Monday, October 15, the radio personalities at 98 Rock’s morning show – Mickey, Amelia and Spiegel, broke with convention to give the Jewish Museum of Maryland a few minutes to talk about our upcoming program, GefilteFest – Sunday, October 21st from 10-5, and to taste the trademark Gefilte fish loaf from Gefilteria.  This Brooklyn-based Jewish Food startup (Gefilteria.com) will be featured at Sunday’s event, when Chief Gefiltemonger, Liz Alpern (whose grandmother resides in Baltimore), competes against Four Seasons first cook, Dave Whaley, and local Baltimore mom, Susan Silbiger, for the honor of being crowned Baltimore’s Gefilte Maven.  The “throwdown” will take place at the JMM at 2pm.  Be there. 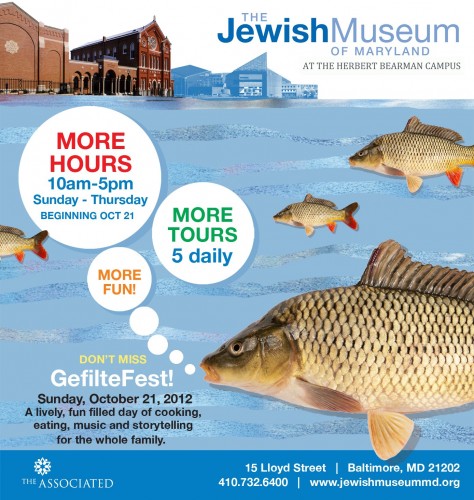 But back to the radio.  How exactly did this fish make it to TV Hill in Baltimore?  It was quite a journey.  The story began Thursday morning, when with Rochelle Eisenberg, Public Relations Associate at the Associated, called the JMM with great news.  98 Rock was interested in talking about GefilteFest on Monday morning on the air!  Susan Press, CFO at the JMM (and alter ego of chef, Susan Silbiger…) was excited.  But there were some challenges to overcome.  How to get a fresh loaf of Gefilte Fish from Gefilteria, in Brooklyn, NY to Baltimore in time for the show.  It wouldn’t be easy.  The thought of shipping fish overnight sounded, well, rotten.

It was time for Susan to call upon her intricate web of relatives and friends who might be making the trip between Baltimore and NYC that weekend and see who might be a willing gefilte courier.  Her sister!  Susan’s sister was heading to NYC on a shopping trip that weekend.  The fish would be sent to Susan’s parents’ home Sunday afternoon and transported back to Baltimore in her sister’s car that night.  Simple.  At 9pm Susan called her sister to inquire about the shopping trip.  As an afterthought she mentioned the gefilte.

“Oh, I forgot it,” she said.  “But, don’t worry.  My daughter can bring it tomorrow night,” she explained.

Susan began to hyperventilate.  Monday night was too late!  The fish had to be in Baltimore by 8am the next morning.   Then her sister remembered, a niece and her fiancé were at a wedding in Brooklyn.  The niece’s future in-laws would be returning to Baltimore on a bus that night.  The bus left New York at 10pm.  It was already nearly 9:30!

A few phone calls later, Susan’s mother was dressed and headed to the wedding in search of the niece.  It was 9:50pm, and despite searching the hall and phone calls, Susan’s niece was nowhere to be found.  Finally Susan called the niece’s fiancé, who assured her that with only ten minutes to spare, they would get that fish on that bus.  The fiancé found the niece.  The niece found Susan’s mother who passed off the fish.  The niece passed the fish to her future brother-in-law.  The future brother-in-law passed the fish to his mother-in-law.  The mother-in-law took the fish on the bus and returned to Baltimore.  At 7am the next morning, Susan’s niece’s future mother-in-law passed the gefilte to Susan, who gave it to her husband, who waited, patiently, and then anxiously, for me (Rachel Cylus, program manager at the JMM) to pick up the fish for the show.

So here is where I enter the story.  I have never been punctual.  Least of all at 8am in the morning.  And I sure could have used a car mezuzah on that Monday morning (car mezuzahs are available for purchase at the JMM gift shop – they make great gifts).  But alas I had only a GPS, and not a very accurate one at that.  I was running on a tight schedule to make my 8:15 appointment with 98 Rock, and I drove right past Susan’s house.  Her husband, on the lookout to successfully hand off this gefilte fish, ran after my car, fish in arms, ready to hand off the loaf like a quarterback looking for a running back (I think that might be as far as I can take this football allusion). I barely stopped my engine as the fish soared into my hands, and I continued on my way.  Touchdown!!! I made it to the station in time (ok, now I promise the poorly used football references are actually over).

As I stood over the sink at the radio station, slicing the gefilte and artfully painting it with carrot and beet horseradish (as per the instructions of Liz Alpern), I was barely prepared for one of Baltimore’s sillier morning shows.  I walked in, Gefilte plated and in hand to be served to the three personalities, and the jokes began.  I won’t begin to tell you the merciless teasing that Liz Alpern (who was telephoned) and I underwent on that radio show – since I am pretty sure it is archived at http:///www.98online.com/shows/MAS.  Listen at your own risk!  But the highlights are this: Gefilte fish was a hit (even at 9 in the morning), Liz and I successfully dodged lots of awkward questions from the hosts, and I even got in a plug for my favorite Jewish War of 1812 veteran, Mendes Cohen ( he is awesome, seriously).   But most importantly, now everyone in the world (ok, anyone who listened to 98 Rock on Monday morning), knows about the JMM and GefilteFest.  And now you, dear blog reader, know too.  So take your own Gefilte Fish voyage to the JMM this Sunday, from 10-5 and have a whole lot of fun.