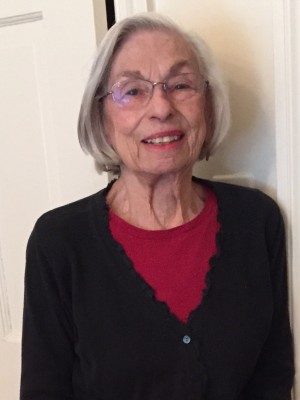 Marilyn is Marna Walter’s given name but she only uses that when signing checks. She obtained the nickname from her niece who couldn’t say Marilyn and came up with Marna as the substitute.  What we call her is dependable.  She volunteers at the JMM as a Front Desk Receptionist and can be spied at the JMM on most Sundays throughout the year.  She has been volunteering at the JMM since early 1997.  She began as a Docent for the exhibit Too Jewish? Challenging Traditional Identities which was shown in temporary exhibition space in Owings Mills during renovations at the JMM campus on Lloyd Street.  A while after, she switched to working at the Front Desk.

Marna volunteers elsewhere in the community too.  She is a volunteer for a program her family helped initiate at then Montebello Hospital, now Kernan’s, for patients with Multiple Sclerosis.  She helps patients who spend the day at the center with their meals, playing games, exercising, Tai Chi, and just plain having fun.  One volunteer per day assists the staff with the patients when the center is open, Mondays through Thursdays.  On another day during the week, Marna volunteers at Weinberg Place in their food market.  Her original participation in the project was through her affiliation with the National Council on Jewish Women (who gave the original seed money for the program).  She mans the register and used to do all of the purchasing.  Plus, she enlisted two of JMM’s other volunteers; Ernie Silversmith and Renate Milewich to help out too.

Prior to volunteering, Marna worked as a medical technologist.  She worked at D.C. General Hospital while her husband, Paul a lawyer, was stationed in Northern Virginia, and at Sinai Hospital in Baltimore.  She has lived in the same house since 1963, where she currently hosts Shabbat dinner every week for her children, grandchildren and great-grandchild. It’s usually a crowd of 8 – 10 people. She works every Thursday and Friday to prepare for the family.  If a family member is lucky enough to have a birthday that week they get to choose the menu. This week the menu selected by a lucky birthday girl is brisket, twice baked potatoes, cream of spinach, and sour cream coffee cake (the kind with nuts and cinnamon) for dessert.

Marna’s favorite aspect of volunteering at the JMM is the rapport between the visitors, staff and volunteers.  She has had a very positive experience while volunteering with us.  She enjoys the opportunity to give advice and receive a glimpse of appreciation when she suggests just the right thing.  She loves it at the JMM and we love having her as a member of our volunteer corps.  She considers it an honor but I assure you, the honor is all ours.

A blog post by Volunteer Coordinator Ilene Cohen. The first Monday(ish) of every month she will be highlighting one of our fantastic JMM volunteers. If you are interested in volunteering with the JMM, drop her an email at icohen@jewishmuseummd.org or call 410-732-6402 x217! You can also get more information about volunteering at the Museum here.