Bob Brooks has been volunteering at the JMM for over 6 years. For most of that time he has been a Docent, but while nursing an injury he helped out in the Archives for a while too.  Prior to becoming a docent at the JMM, he was a docent at Homewood Museum. 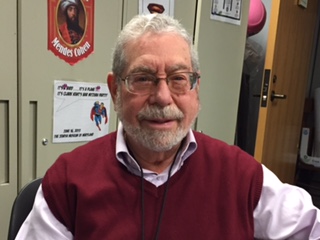 Originally from New York, he became a Baltimorean upon retirement. His wife, Devorah was originally from Baltimore so she became a replant, while Bob became a transplant.  Prior to retirement he was a certified financial planner and worked as the Administrative Vice President and Controller of a manufacturing company. He worked for the same company for 40 years.

Bob has an interest in all subjects that are Jewish. He has gained knowledge from many years of study and as a regular shul goer.  In addition to the many classes he takes at Beth Tfiloh, he also likes to learn about subjects as varied as photography, computers, and physics at CCBC and elsewhere around town.  He determined that these interests would lend themselves well to becoming a docent at the JMM. His favorite aspect of being a JMM docent is meeting the visitors. He particularly enjoys meeting out-of-towners and especially non-Jewish visitors. With them he feels he can impart a certain knowledge that they do not yet have. He reaches back to the time when he taught Comparative Religion to Confirmation class students at his Conservative synagogue. He fondly remembers when he took those students to a Lubavitch Center on Hoshana Rabbah, to demonstrate differences in their own religion, not simply compared to other religions.

Bob recalls an incident that occurred while touring with a group of inner-city students on the synagogue tour at the JMM. One of the students asked, “Didn’t the Jews kill God?” The teacher was mortified! Bob’s response however was, “You can’t kill God, there is no way you can kill God.”  Great answer Bob!  He describes his volunteer experience at the JMM as a very good one. We look forward to continuing that experience together, for many more years.

A blog post by Volunteer Coordinator Ilene Cohen. The first Monday(ish) of every month she will be highlighting one of our fantastic JMM volunteers. If you are interested in volunteering with the JMM, drop her an email at icohen@jewishmuseummd.org or call 410-732-6402 x217! You can also get more information about volunteering at the Museum here.