A blog post by Program Manager Rachel Cylus. Opening photographs by Will Kirk.

At one of my brother’s birthday parties as a little kid, my parents hired a magician/comedian.  He would stand in front of a crowd of 4 or 5 year olds and say, “Wanna see Batman?!?” and when they roared “YEAH!!!” he would respond, “Well, he’s not here.”  My brother and I thought it was hysterical (what do you want?  We were 3 and 5).

Last Thursday I learned just how un-funny the punch line to this joke can be, because Batman, who I had hired to come to the ZAP! POW! BAM! opening, was not going to be there.  For completely understandable reasons, our Batman had to leave town at the last minute leaving us, well, in need of a hero to save the day.

So, I did what any rational person would do – I sent out the Bat Signal.  The Bat Signal, as you probably know, is a searchlight that casts the shape of a bat into the night sky.  It is used by the folks over at the Gotham City Police Station when they need to summon the Caped Crusader.  I climbed up onto the roof of the Lloyd Street Synagogue, positioned the searchlight somewhere over the Inner Harbor, and hoped that a Batman or at least maybe a Raven, would answer my call.

Alright, maybe this is not exactly what happened.  For one thing, this moment of crisis came in the middle of the day, when it is doubtful anyone would have been able to see anything reflecting on the sky.  Instead I went to social media and to friends and fortunately to one friend’s theater list-serve with this request:

Be Batman for a day!

The Jewish Museum of Maryland is looking for one person to portray Batman for two hours on Sunday, January 27th from 11 – 1pm.

And wouldn’t you know it, we got a response.  And then another, and another and another.  In fact my phone was ringing off the hook and emails poured in all day.  It was a miracle of epic proportions.  Turns out, lots of people would jump at the chance to be a superhero for a day.

People sent pictures of themselves in Batman costumes, describing their lifelong love of the Dark Knight.  We had people who had been extras in Batman movies, dressed up as Batman for Comic-Con, as well as serious actors who boasted their experience with stage combat and their solid knowledge of The World’s Greatest Detective! 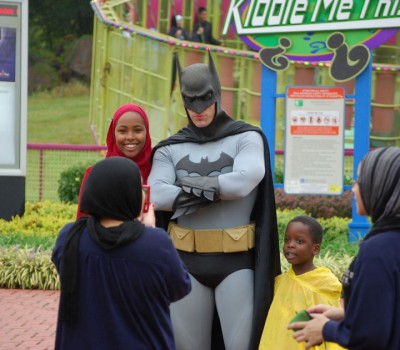 But fortunately one Batman stood out from the crowd.  He sent a picture of himself portraying Batman last summer at Six Flags Amusement Park.  He was THE REAL BATMAN!!!  He even still had his professional costume.  I won’t identify him by name, just know that he definitely saved the day. 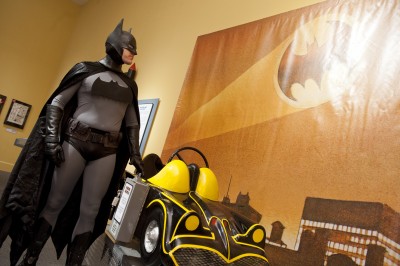 When Batman arrived at 11am at the Jewish Museum of Maryland, the children (many in costumes themselves) were delighted.  They wanted to see Batman… and he was HERE! 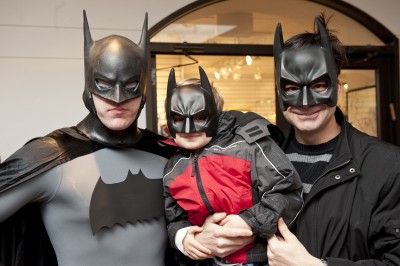 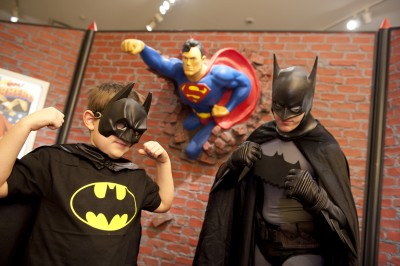 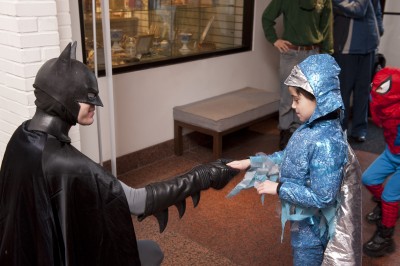