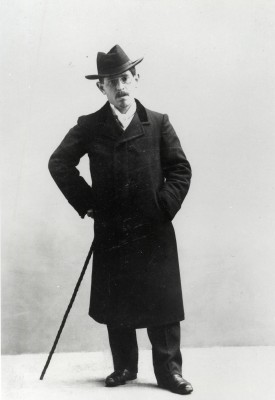 Saul Bernstein’s story of coming to American is quite similar to many other Jewish immigrants. Born in 1872 in Posvol, Lithuania which was, at this time, under the rule of Czarist Russia, Saul was given the opportunity to start a new life in America in 1889 when he received a letter from his uncle Abram who had already made the journey. His mother helped him purchase a ticket on a ship by giving him all the money she had saved over the years as a dressmaker. At the age of 17, Saul traveled by himself on a ship that arrived in Castle Gardens, New York (Ellis Island did not open as a port for immigrants until 1892).

From New York, Saul made his way to his uncle’s home in Baltimore. He stayed in his uncle’s home for only a week before he embarked on a career that became a way of life for so many Jewish immigrants as a peddler. He started by peddling tin wares in small towns on the Eastern Shore but he soon moved onto a new route and began traversing the mountains of western Maryland and West Virginia.  In a letter written later in life, Saul brings the challenges of life as peddler to life with this vivid (and indeed humorous) description:

… So to providence I risked myself out in the open wide country arranged the Eastern shore of Maryland.  I disappointed my compatriots so much that in spite of my little figure and delicate look I was inside of 6 months under a drygoods pack competing with many large competent peddlers indeed climbing at Harrison Co. West Virginia.  Of course, there were many ups and down there sometimes starting to roll ahead helplessly, on account of the slippery fall leaves or grass…. The head over heels seldom harmed me much.  There was only once I had my left arm in a sling for a few days.  You see the nature of a wooden drygoods pack is thus: as soon as the peddler loses the balance, he falls and the back takes the advantage of him by rolling about, cast outlay, loose handle knives and forks etc. until it reaching breathlessly the foot of the giant and there it remains helplessly where it is too dark to find the path that as former directed to, and while the nights are too wet and cold to stay outdoors, the last victim feels his way into tumble and the result is unknown to him until he gathered his pieces up…My pack was always, when filled, heavier than myself so I discovered myself contemplating the sky with closed eyes. 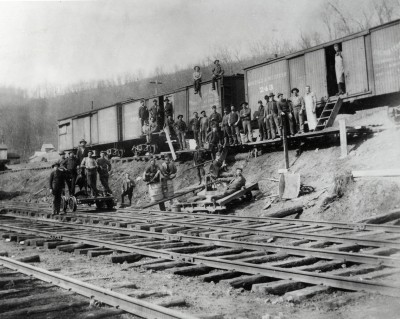 In this photo, we can see a young Saul Bernstein standing in a group of peddlers and railroad workers in the town of Bluefield, West Virginia. He stands in the center of the photo with a dry goods pack slung over his shoulder.

Despite the challenges, Saul found success as a peddler and by 1891he was able to pay for the passage of his parents and brother to the United States. By 1892, he became part-owner of a dry good store in Coopers, WV. Despite his success, however, Saul had a dream that was not typical of many other young Jewish immigrants; he wanted to become a professional artist. During his years as a peddler, he always carried a sketchpad and art supplies which he used to capture the life of the small towns that he passed through. His dry goods store, Silver and Bernstein Clothing, was distinctive because of the art that filled its walls. 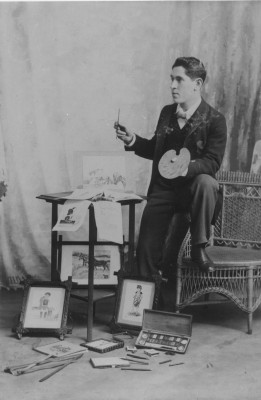 Saul had a professional photographer take this portrait of him as announcement of his intent to follow his dreams, just prior to selling his shares in his store and moving back to Baltimore to attend art school. His art studies also took him to New York and Paris where he studied at the famed l’Academie Julian. Despite the odds, Saul’s art career was taking off! 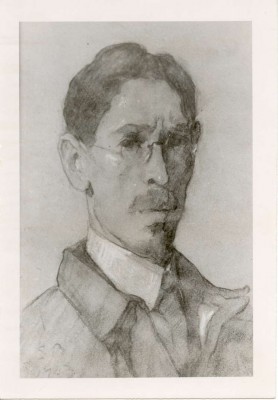 As his art career was flourishing – his work was even purchased by noted Baltimore art connoisseurs Etta and Claribel Cohen – he also became a Zionist activist and attended meetings of the local Hovevei Zionist chapter. It was at these meetings that he met his future wife, Jennie Abel. 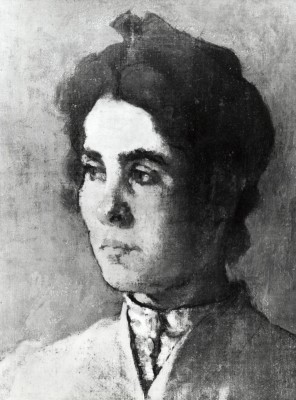 It was also through his Zionist activism, that he had the opportunity to meet Henrietta Szold, the Baltimore-born founder of Hadassah, the women’s Zionist organization. Szold became a friend, mentor, and patron to Saul and helped promote his art to the cream of Baltimore’s Jewish society. Saul’s interest in Zionism influenced his artwork, as he became more preoccupied with Jewish subject matter as seen in these two works: 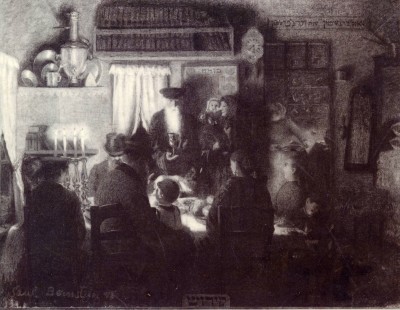 In a letter written to Saul, Henrietta Szold spoke to this passion as she urged him to continue painting Jewish themes:

It would make me happy beyond measure to have you succeed as an artist, a Jewish artist, no matter how poor you may be to the end of your life, no matter how few of your Jewish pictures were sold…

Saul died a young man at the age of 33 just as he was entering his prime as an artist. His artwork can be found in the collections of the JMM and the Baltimore Museum of Art as well as in the homes of individual patrons and family members. Saul’s letters to his family and to his patron, Henrietta Szold, reveal such rich details of his life and are preserved in the JMM’s archives. And Saul’s story comes to life dozens of times each year through the JMM’s Leo V. Berger Immigrant’s Trunk, an educational resource devoted to immigration history.

Actor Tim King originated the role of Saul Bernstein when we embarked on a project to bring Saul’s story to life through a dramatic living history performance in 2002. Through Tim’s considerable talents and ability to connect with audiences of all ages and backgrounds, the Leo V. Berger Immigrant’s Trunk reached hundreds of school children and adults. 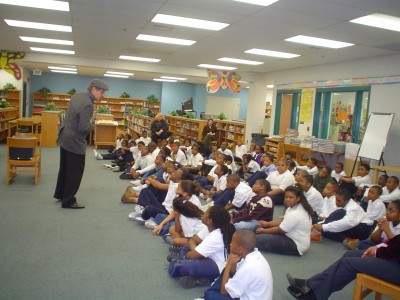 Audiences were mesmerized by Tim’s portrayal. As one teacher wrote:

“This is a quick thank you note from Majestic Minds at Mount Washington Elementary School.  Tim’s Show was EXCELLENT!  It was an excellent learning experience for the children, myself and the staff member listening.  Tim very easily engaged the children’s attention and kept their attention.  The children proved their listening skills by answering questions asked and even asking their own questions at the end. It was a wonderful experience for them and an excellent lead-up to our visit there in December.  Thank you.  Thank you.  Thank you.”

Sadly, Tim passed away last spring after a battle with lung cancer. Tim’s death was a devastating loss to our local arts community and to the JMM, not to mention to his family. As reluctant as we were to move forward with the program without Tim, we kept hearing from schools and synagogues that were eager to book programs for the current year so we made the decision to hire a new actor for the role. It is our distinct pleasure to welcome Grant Cloyd to the role of Saul Bernstein. We are currently in the process of re-launching this program and hope to have shows available for booking beginning in January.

To learn more about the Leo V. Berger Immigrant’s Trunk or to book a performance, please contact Elena Rosemond-Hoerr / erosemondhoerr@jewishmuseummd.org.