Chosen Food – A Year in Review

The end of the month is quickly approaching which means many things – my kids are counting down the minutes to winter break; I’m getting awfully tired of Christmas music; and everyone at the Museum is scrambling to meet end of the year deadlines. The end of December also signals one more important event – the closing of Chosen Food: Cuisine, Culture, and American Jewish Identity. This original JMM exhibition which opened in October 2011 has proven quite popular with visitors and staff and has inspired a variety of food-related conversations, blog posts, partnerships, and programs. It has truly been a year filled with food, food, and more food! 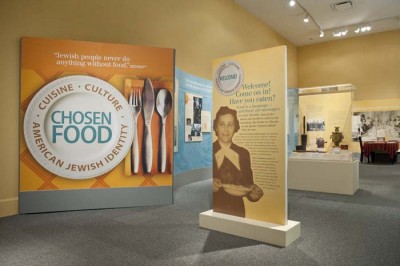 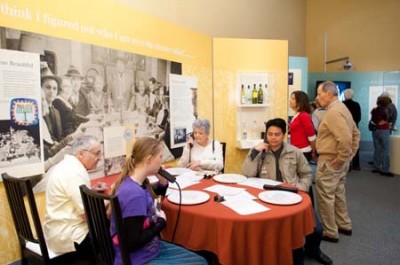 Here in no particular order are some of the highlights of this past year’s exhibition-related activities:

In 2011 we launched a new program initiative supported by the Jacob and Hilda Blaustein Fund for the Enrichment of Jewish Education designed to attract young adults to the JMM for evening programs featuring speakers, exhibit tours, hands-on demonstrations, and workshops. We couldn’t have picked a better time to begin this program series as we themed many of our programs on the topics of food, gardening, and sustainability. Based on the popular Food Network show, we held two Iron Chef competitions (in celebration of Passover and Sukkot). Here we see a team participating in the Iron Chef Passover competition working to incorporate horseradish (the secret ingredient) into their dishes. One of the evening’s winning dishes was a surprisingly delicious horseradish ice cream.

The JMM’s own amazing Esther Weiner hosted EstherFest! a celebration of Chanukah complete with latke making, joke telling, and story sharing. This program proved so popular, we repeated it again this year. Esther’s fame has traveled wide and far and she has been featured on WYPR’s The Signal. We cannot understand why Esther does not have her own cooking show on the Food Network!

Chosen Food highlights the ways in which Jewish food traditions have absorbed the customs of other ethnic and religious groups as well as the extent to which Jewish food culture has impacted mainstream American culture. We continued to explore these cross cultural comparisons through many programs. One program featured Dr. Joseph Regenstein, Professor of Food Science at Cornell University and head of the Kosher and Halal Initiative, who facilitated a fascinating discussion about the similarities and differences between kosher and halal dietary regulations.

What do you get when you mix Jewish and African American culinary traditions? Kosher Soul, a program featuring culinary historian, Michael Twitty, who demonstrated how he has incorporated his adopted Jewish faith into traditional African American recipes. The results were such tasty dishes as black bean hummus, collard green pastrami soul rolls, and sesame hamantaschen. Audience members loved tasting his dishes.

So many Jewish delicacies to explore in such a short period of time. Knish lover, Laura Silver, provided a fact-filled lecture about the history of knishes followed by a sampling of many of Baltimore’s best home-made and store bought versions.

Not all of our related programs took place on-site. In April we were invited to travel to DC to participate in a Passover program at the White House. Cookbook author Joan Nathan and White House pastry chef Bill Yosses led a hands-on cooking demonstration of traditional Passover dishes while JMM staff members Karen Falk and Rachel Cylus shared holiday stories. 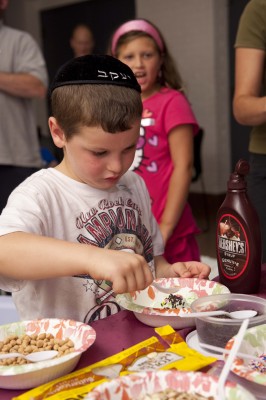 Food-related programming also proved popular with families. This summer, in conjunction with the 100th anniversary of the Hendler Creamery (a Jewish-owned ice cream company that was located just across the street from the JMM on Baltimore Street), we held several ice cream making (and eating) programs.

Celebrating the connection between Jews and Chinese food and games was the theme of our 2011 annual Christmas Day program, Chanukah, Christmas, and Everything Chinese. Thanks to the assistance of Lois Madow of the American Mah – Jongg Association we were able to provide mah jongg lessons for our visitors along with crafts, games, and tasty Chinese food sampling.

Join us again this year as we continue to celebrate the Jewish/Chinese connection at Dragons and Dreidels on Tues. December 25. [More info can be found at http:///www.jewishmuseummd.org/event/dragons-and-dreidels-%E2%80%93-christmas-day-jmm-special-guest-jennifer-8-lee or call Rachel Cylus at (410) 732-6400 x214] 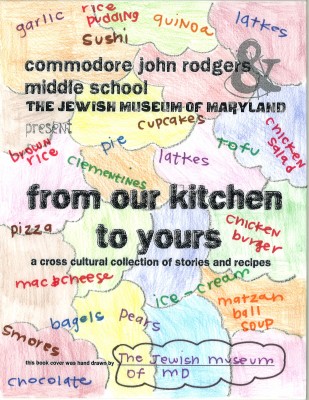 The exhibit proved popular with audiences of all ages and backgrounds. Thanks to the efforts of our education staff, we developed a range of activities for visiting school groups to enhance their tours through the exhibit with art projects, scavenger hunts, and small group discussions.

Chosen Food also served as inspiration for a year-long partnership project with students from nearby Commodore Rodgers Elementary/Middle School. Students toured the exhibit and then met regularly with JMM staff to gather family recipes and create a classroom cookbook. This year’s partnership project involves the creation of a school community garden.

One of our most rewarding partnerships has been with the staff at Kayam Farms at the Pearlstone Center. In addition to facilitating several Brews and Schmooze programs (and supplying the secret ingredient at our Iron Chef Sukkot competition), JMM education staff participated in two workshops at Pearlstone Center where we learned about traditional Jewish farming practices and how to lead related activities for school groups. In this photo you see us participating in an activity designed to teach children about the importance of poly-culture agriculture as opposed to mono-culture. Our group split into two teams, one representing pests and the other crops. As you can see, Elena and I had a great time pretending to be pests!

Our culminating event took place this past October as we celebrated perhaps the most Jewish of Jewish foods at GefilteFest. Activities included fish themed activities, specialty tours of the exhibit, snacks, and a gefilte fish making competition featuring Liz Alpern of Gefilteria in Brooklyn; Dave Whaley, first cook at the Four Seasons; and the JMM’s own Susan Press. Believe it or not but top honors went to Chef Whaley’s deep fried gefilte fish corn dog!

Amazingly, this list is not at all comprehensive and only covers a sampling of what we offered this year. Other programs explored borscht making, pie making, bee keeping, canning demonstrations, and more.

If you still have not made it down to visit Chosen Food, do not despair. You still have time…but not much. The exhibit’s last day is Sunday, December 30. It then travels to Atlanta where it will be on view at the William Breman Jewish Heritage Museum.