On October 17, 2012, the JMM opened our newest original exhibition, Jews on the Move: Baltimore and the Suburban Exodus, 1945 – 1968. Exploring a seminal period in American Jewish history – the exodus of Jews from urban centers to newly established suburbs – Jews on the Move interprets the motivations and factors that led to Jewish settlement in the Northwest suburbs of Baltimore County in the post-war years.

In the years following WWII, Baltimore Jews, like so many other Americans, left behind close-knit urban neighborhoods in pursuit of the “American dream.” Within the span of a single generation, the Jewish community swiftly reconfigured itself and experienced a fascinating social, economic and cultural transformation. Jews on the Move explores the local angle of a national story of suburbanization through the eyes of developers, real estate agents, community institutions and organizations, synagogues, and of course the families who helped establish the suburbs of Northwest Baltimore.

What makes this exhibit project especially exciting is an innovative collaboration that resulted in its creation.  Jews On The Move was developed through a partnership between the JMM and The Johns Hopkins University (JHU). With generous support from the Andrew W. Mellon Foundation, The JHU Program in Museums and Society partners with local museums to take undergraduate students out of the classroom and give them hands-on museum experience. The JMM was delighted to be invited to participate in this program, and in the spring of 2012, staff and consultants from the JMM taught a course at JHU that involved students in the creation of “Jews on the Move.”

Because of our partnership with JHU, the exhibit opened on its Homewood Campus. In order to prepare for the opening, on Wednesday morning, several JMM staff members in addition to exhibit designer, Ken Falk, installed the panel exhibition in Hodson Hall. The exhibit consists of vinyl banners that are attached to collapsing metal poles that connect to one another making it easy to transport and install.

At the exhibit opening on Wednesday pm, Katherine S. Newman, James B. Knapp Dean of the Krieger School of Arts and Sciences, welcomed guests. JHU students who participated in the course talked about their experience in researching and designing the exhibit. Guests mingled, enjoying refreshments and an opportunity to view the exhibit and share their own reminiscences of their family’s move to the suburbs. 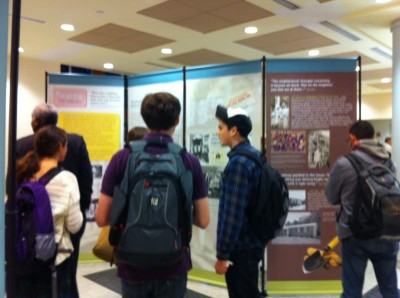 Jews on the Move has been designed as a traveling exhibit and is available at no charge to hosting institutions. If you are interested in hosting this exhibit, contact Rachel Cylus at (410) 732-6400 x215 / rcylus@jewishmuseummmd.org. Also, be sure to check out the exhibit website www.jewsonthemove.org where you can send in your own suburban stories and photos.