Walking and Talking about Historic Architecture: Sometimes it’s a challenge!

A week or two ago a teacher from a college in Pennsylvania called me, asking about Jewish cultural sites to visit in Baltimore that would be open on a Saturday because that was when she was bringing her World Religions class on a field trip here. I told that was going to be a little difficult.

What I could offer, however, was to email her a copy of our self-guided walking tour. She seemed excited about that, and our conversation ended on a satisfied note. The only problem now was that I knew the tour hadn’t been updated since 2007, and the “construction sites” mentioned in the script were now the completed houses of Albemarle Square.

For those of you who don’t know (and this might even include some JMM staff members!), our self-guided walking tour takes the visitor around our neighborhood of Historic Jonestown and tells a little about the history of some of the buildings that you see—and some of the buildings that you don’t see. For example, one of the stops is the old Hendler’s Creamery Company building on Baltimore Street, and another is the Russian Bath that once occupied the space where Lenny’s Deli now stands.

Ilene and I looked through the tour, updated it to match the current landscape, and we also decided to add more information. In the old script, almost nothing was mentioned about St John the Baptist Lithuanian Roman Catholic Church other than the fact that the congregation occupied the Lloyd Street Synagogue from 1890 to 1905. So, I added some tidbits that I thought would be very interesting about how the Lithuanian Catholics used their building. Did you know that the Lithuanian Garment Workers’ Union was founded in Lloyd Street Synagogue? Well, now you do, and anyone who takes the walking tour will also know that fact.

We also added more information about the Carroll Mansion, which is a couple of blocks away from us, but in order to do that, I had to do a little bit of research about the building’s history myself. I had no idea that the Mansion had gone through so many phases in its long life. I thought the Lloyd Street Synagogue had a complicated life story, but the Carroll Mansion has got it beat! First, it was the residence of the Carroll family—including the famous Charles Carroll, signer of the Declaration of Independence. It later became a tenement house for immigrants, and then a sweatshop-tenement combo, and then it was a vocational school, and a recreation center, and a WPA project during the Great Depression, until 1962, when it finally became a museum.

The part of historic restoration and preservation that fascinates me the most is what you do with a building that has had several roles in its life. To what era do you restore it? Is it more important to highlight the mansion’s first incarnation as the residence of an important personage? Do you use the building to talk about sweatshops? Or could you use it to talk about the Great Depression? There are so many roads to choose, and I don’t know how to even begin deciding which one to take.

The Jewish Historical Society/Jewish Museum of Maryland had a similar dilemma with Lloyd Street Synagogue, and they ended up creating an interesting compromise—combining elements of the building that were present during Baltimore Hebrew’s tenure and that of Shomrei Mishmeres. 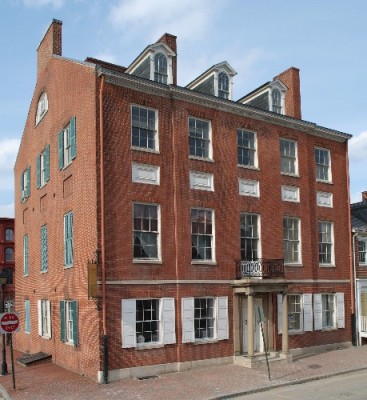 I think it’s time I made a little field trip to the Carroll Mansions to see how they dealt with this challenge.