Two for the price of one!  The following post has two related collections: MS 132 and MS 182 both of which contain materials related the Joseph M. Zamoiski Co. and the Zamoiski family. 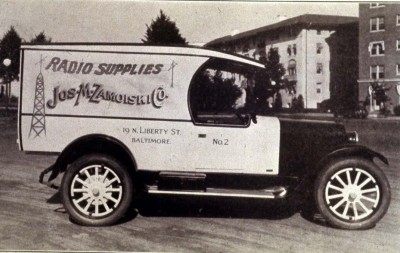 Calman J. Zamoiski, Sr. (1896 – circa 1970) was born inBaltimoreto Joseph M. and Tena Zamoiski.  The elder Zamoiski established Joseph M. Zamoiski Co. as an electrical supply and construction business.  Calman, Sr. worked in the business until his service in World War I.  After the War he returned to the business and became interested in radio.  The Zamoiski Company began stocking radio parts and Calman, Sr. received a radio operator’s license in 1921.  In that same year, he establishedBaltimore’s first commercial radio station (WKC) in a room in his home at2527 Madison Avenue.  The station ceased broadcasting in 1924.  About the time of Joseph’s death in 1927, Calman, Sr. took over as head of the family business.  He ran the business until at least 1956, when his son, Calman, Jr., succeeded him.

The Zamoiski papers contain memorabilia of Calman Sr.’s service in the U.S. Army during World War I.  There are letters from family and friends, diaries, and other souvenirs of his war service inFrance.  There are also copies of his radio operator’s license as well as articles describing his foray into broadcasting.  Also included are memorial tributes to Calman, Sr.’s mother and father, Joseph and Tena who died in 1927 and 1952, respectively.

The Zamoiski Company papers consist of information about products sold by the Company, Company advertising and sales brochures, and the Company’s annual convention booklets.  There is also some documentation of Calman Sr.’s involvement in other business ventures including a patent application of M.W. Askin and service by Calman Sr.’s brother, Joseph M. Zamoiski, to the Big Brothers of the National Capital Region.

The Joseph M. Zamoiski Co. Minute Book Collection was donated to the Jewish Museum of Maryland in 2007 as accession 2007.072 by the Zamoiski family. The collection was processed by Jennifer Vess in February 2010

Joseph M. Zamoiski established the Joseph M. Zamoiski Co. as an electrical supply company in 1896.  In the early years the company distributed batteries, lighting fixtures and accessories, and also participated in electrical contracting.  The original building burnt down in the 1904Baltimorefire, but continued to operate in temporary quarters.  The Joseph M. Zamoiski Company incorporated in 1909.  In the 1920s the company added radios and phonographs to their stock and continued to expand the variety of products over the decades to include, among other things, home appliances, and televisions.  By the 1970s the company had multiple product divisions with warehouses inBaltimore,MDandWashington,D.C.and its own fleet of delivery trucks.

The collection contains six minutes books ranging in years from 1909-1974 and two additional books containing articles of incorporation and meeting minutes for the Joseph M. Zamoiski Co. and the Gigi and Cal Zamoiski Foundation, Inc.  The papers are generally organized chronologically and contain Board of Directors and Stockholders meeting minutes as well as by-laws from various years.

Can you shed any light?
Thank you