Jews In Space: Members of the Tribe in Orbit 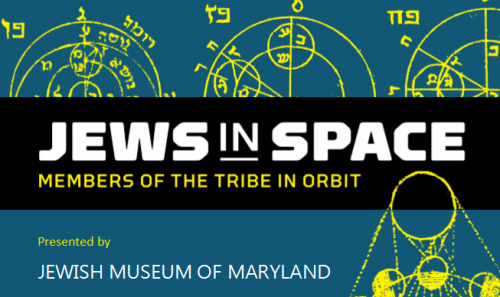 From Science Fiction to Science Fact, New Exhibit at the Jewish Museum of Maryland Explores the Wonders of Space.

As the reality of life on Earth, continues to get more complicated, the Jewish Museum of Maryland is welcoming visitors into their building to explore the wonder of space. From ancient astronomers to today’s space scientists and astronauts, Jewish people have been interested in “looking up.” Outer space has also inspired Jewish artists, writers, comedians, and thinkers, both religious and secular, to boldly imagine realms beyond our Earth.

Jews In Space: Members of the Tribe in Orbit was a year and a half in the making and debuted at the Center for Jewish History in New York in partnership with the YIVO Institute for Jewish Research. We are moonstruck to share this unusual and entertaining exhibit here at the Jewish Museum of Maryland.

Visitors who acquire one of the limited number of tickets (through pre-purchase on the website) will find items as rare as 18th and 19th century rabbinic tomes on astronomy in Hebrew, German and Yiddish, and items as idiosyncratic as science fiction memorabilia.  The exhibit features mementos from other Jewish space travelers and a detailed timeline of Jewish accomplishments in astronomy and spaceflight.

With a title that pays homage to comic filmmaker Mel Brooks, the exhibit content was inspired by rare rabbinical astronomy texts. Curators incorporated these ancient Jewish surveys of the cosmos, along with modern science fiction and pop culture references, and included some science and information about actual space programs to create an engaging in-gallery experience.

As a part of our mission to connect people to Jewish experiences and the Maryland Jewish community to its roots, JMM has enhanced the exhibit with “Marylanders Feel the Wonder of Space,” a new section highlighting the many space-related connections of Maryland and its residents. A particular highlight is the What Would You Bring to Space wall display, featuring artwork created by children both locally and across the continent.

Visitors to the Museum will be able to interact with the exhibit in several safe, socially-distant ways, including experimenting with creating otherworldly music on a touch-less theremin and measuring their height in “Asimovs,” showcasing the prolific writings of the famous Jewish American science and science fiction author Isaac Asimov.

The Jewish Museum of Maryland recognizes that even with our new safety policies and procedures, visiting in person is not the best option for everyone. To share the Jews in Space experience with as many Marylanders as possible, the Museum will be offering virtual tours of the exhibit on a regularly scheduled monthly basis. Exclusive virtual tours are also available for families and groups to book on their preferred schedules.

JMM is excited to offer a selection of virtual programs in relation to the Jews in Space exhibit over the coming months, including a deep dive into the works of Mel Brooks with Dr. Arnold Blumberg, an evening of stories about “exploring, discovering, and dreaming about outer space” with Baltimore’s Stoop Storytelling Series, and a special museum members-only program with Marc Okrand, inventor of Star Trek’s Klingon language. The Museum is also offering free access to a series of recorded programs presented in the lead up to the opening of Jews in Space, including Are We Along and Does It Matter: Jewish Perspectives on Extraterrestrial Life and How to Be Jewish in Space.

Check out the special exhibit website, JewsInSpaceExhibit.com for more information!

Photos of Exhibit (By Will Kirk)

Public Programs for Jews in Space

The Extraordinary Voyages of the Yiddish Jules Verne
January 7, 2021 at 7pm

Writing Ourselves into the Narrative: Maryland Sci-Fi Writers
January 21, 2021 at 7pm

Can Elephants Jump?: A Different Look at Science, the Talmud and Judaism
March 11, 2021 at 7pm

As Above, So Below: Astrology in Jewish Cultural History
March 18, 2021 at 7pm

Exploring the Science in Science Fiction
April 7, 2021 at 7pm

The Baltimore appearance of the Jews in Space exhibit in Baltimore is possible in part through the generous challenge grants made by the Joseph & Harvey Meyerhoff Family Charitable Funds and Miriam Winder Kelly in memory of Patrick J. Kelly Jr., pro-Space Activist & Baltimore Science Fiction Society founder and lead gifts from PNC Greater Maryland and Larry Boltansky.

Additional funding for this exhibit comes, in part, from: