After a couple of archive posts about the collections of organizations, it’s time to get back to an individual.  The following collection is small but packed, and deals primarily with the service of Sergeant Isaac Gordon during World War I.  Besides letters, Sergeant Gordon also saved several copies of the Stars and Stripes, the newspaper published by the US military.

After more than ninety years the cheap newspaper is a little worse for wear, but the content is still fascinating.  We were also able to find the full issues on line through the Library of Congress, which has digitized the Stars and Stripes published during World War I.  I’ve included a link for that site at the bottom of the finding aid.

The Sergeant Isaac Gordon Papers were donated to the Jewish Museum of Maryland in 1985 by his daughter, Phyllis Pollokoff. It was received as accession 1985.122. The collection was partially processed at an unknown date and completed by Andrea DeBoef in 2011. 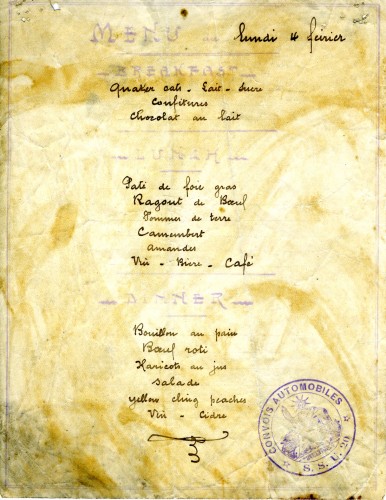 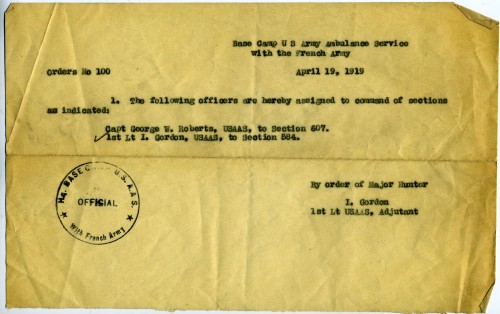 The Sergeant Isaac Gordon Papers are compiled from his time in the U.S. Army Ambulance Service with the French Army between 1917 and 1919. This collection includes personal letters to brothers Leroy and Jake; his sisters Betty, Anna, Sadie, and Flo; and his parents in Pittsburgh, PA, also military orders, an affidavit, a menu, and newspaper clippings. There are around 250 letters, but approximately 200 of these are photocopies. The owner retained the originals. The files are organized by type (letters, military papers, and newspaper clippings) and then chronologically. For preservation purposes, photocopies of the letters and clippings will be used for research.

The Library of Congress provides access to digitized copies of the Stars and Stripes from World War I at the following site:

*Thank you to Bob Pollokoff, Isaac’s grandson for the correction. Mary Gordon was Isaac Gordon’s mother.

Corrections: Isaac, or Ike, was not married to Mary. His mother was Mary (married to Wolf).
Ike was married to Esther. You still haven’t made these corrections, which I mentioned in March, 2012. (see above)

I was thrilled to see this letter from my Uncle Ike to my mother, Betty Gordon Grinberg. She idolized her big brother.

Correction to the accompanying statement: Mary was Wolf’s wife and Isaac’s mother. Isaac’s wife was Esther.