It’s time for another look the Szold family.  This time it’s all about Henrietta and Bertha.  In a few weeks (hopefully) I’ll be able to share the rest of their papers with you after processing the Levin family papers.  Both Henrietta and Bertha show up in that collection, too.

The Henrietta Szold and Bertha Szold Levin Papers were found in the museum’s collection and accessioned as part of 2004.076. The collection had been processed at an unknown date, but was reprocessed by Jennifer Vess in 2011.

Henrietta became a teacher, first at her alma mater,Western High School, then at a private girls’ school run by the Adams sisters in Baltimore, where her sister Sadie also taught.  She acted as principal for the night school established by the Hebrew Literary Society.  In her teens Henrietta began writing for publication.  In 1893 Henrietta left teaching to become secretary for the Jewish Publication Society, an organization that she had volunteered for over many years.  As a paid employee her duties included editing, proof-reading, translating and revising manuscripts.  When she took up the post she moved from Baltimore to Philadelphia to be closer to the society’s headquarters.

Henrietta spent many years involved with Zionism.  In 1893 she joined the Zionist Association of Baltimore, the first organized Zionist group in theUnited States.  She also volunteered with the Federation of American Zionists (later the Zionist Organization of America), where she helped coordinate the activities of the organization’s Education Department, including Young Judaea, Histadruth Ivrith, and the Intercollegiate Zionists.  Henrietta is probably best known for her contributions to the formation of Hadassah in 1912.

In 1902, after the death of her father, Henrietta moved with her mother and youngest sister, Adele, toNew Yorkwhere Henrietta attended courses at the Jewish Theological Seminary.  In 1920 Henrietta travelled to Palestine where she essentially lived until her death in 1945.  She became very involved with the activities of the Jewish community inPalestine.  At the Zionist Congress of 1927 Henrietta was elected to the Palestine Executive Committee in charge of health and education.  She served for two years.  From the early 1930s until 1938 Henrietta served as the head of the Social Welfare Department of the Zionist Congress.

Bertha Szold was born December 21, 1873 – thirteen years to the day after the birth of her oldest sister, Henrietta.  Bertha attended the Adams’ school where Henrietta and Sadie had both taught, then moved onto Bryn Mawr College in 1891.  She graduated from Bryn Mawr College in 1895 and soon took up a post as English teacher at St. Timothy’s school for girls in Catonsville, Maryland.  On June 19, 1901 she married Louis H. Levin, a lawyer and editor for the Baltimore Jewish Comment who was prominent in the formation of the Associated Jewish Charities.  They had five children: Benjamin, Harriet, Sarah, Marcus Jastrow, and Eva Leah.

In 1924 Bertha was appointed to the Baltimore City School Board (the first woman ever on the board) and served until 1940.  Bertha, like Henrietta, was a Zionist.  Not only did she travel to Palestine to help with her sister’s work, she also formed the Business & Professional Women’s Group of the Baltimore Chapter of Hadassah in 1920.  This chapter allowed women who worked for a living to take part in Hadassah.  Bertha also worked with the Central Scholarship Bureau.  She died in 1958.

The Henrietta Szold and Bertha Szold Levin Papers contain documents, books and some photographs related to the activities of the sisters and their family.  The collection contains mostly correspondence, but also some published and unpublished articles, lectures and speeches, record books, publications, and clippings.  The collection has been split into two series: Series I. Henrietta Szold Papers, 1866-1977, contains correspondence, notes, publications, and books mostly related to Henrietta.  The papers were grouped together during a previous processing of the collection and some of the documents may not have been owned or used by Henrietta.  Series II. Bertha Szold Levin Papers, 1885-1958 contains correspondence and writings connected to Bertha Szold Levin. 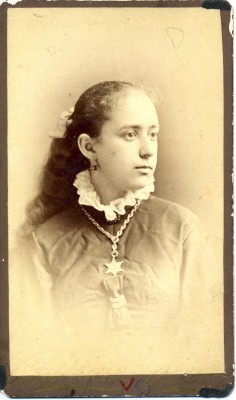 Series I. Henrietta Szold Papers, 1866-1977 is divided into nine subseries.

Subseries A. Correspondence, n.d., 1866-1944 contains letters mostly written to Henrietta rather than by her.  The letters come from a wide range of friends and family including her parents and sisters, German relatives,Baltimore associates, and national associates.  The letters also came from a number of Jewish and Zionist organizations with which Henrietta associated.  The correspondence are organized chronologically.

Subseries B. Lecture Notes, 1910-1920 contains notes for lectures that Henrietta attended or lectures she herself gave.  The places and subjects of the lectures cover national as well as local organizations including: the Council of Jewish Women, Young Women’s Hebrew Association, Hadassah, High School Girls’ Association Brandeis, Zionism, Educational Alliance, Palestine schools, Washington Heights Sisterhood, Diaspora, Modern Egypt, etc.  The lectures were given throughout the United States including New York, Pennsylvania and Texas.  The lecture notes are organized chronologically.

Subseries D. Documents, 1875-1977 begins with documents related to Henrietta’s schooling and includes items related to her estate and remembrances of Henrietta after her death.  The collection includes of variety of documents including inventories, catalogs, postcards, invitations, programs, etc.  The documents are in no particular order.

Subseries F. Financial Documents, 1894-1927 contains account books and bank books for Henrietta’s transactions in the United States as well as in Palestine.

Subseries I. Correspondence (copies), 1866-1950 are photocopies of letters that DO NOT belong to the JMM.  These are transcripts or copies of archival materials housed in other archives.  The JMM has no rights to these, and cannot give permission for their use or copying to researchers.

Subseries A. Correspondence, n.d. 1886-1951 contains letters, mostly written to Bertha, though the collection does contain some letters written by her.  Letters written by Bertha can be found in the folders labeled ‘correspondence.’  The majority of the letters are from friends and family though she did receive correspondence from Jewish and Zionist organizations.  The subseries contains a large number of letters dated 1945, the majority of which come fromPalestine, particularly from Emma Ehrlich, and often refer to Henrietta or her estate.  The letters are organized chronologically.

Subseries B. Writings and Speeches, n.d., 1898-1955 contains articles and speeches written and delivered by Bertha. The subseries is organized by writings first and speeches second, each section in chronological order.

Subseries C. Personal Papers, n.d., 1885-1958 contains school papers, financial documents, and an obituary for Bertha Szold Levin.  The subseries is not organized in a particular order.