The Jewish Museum of Maryland 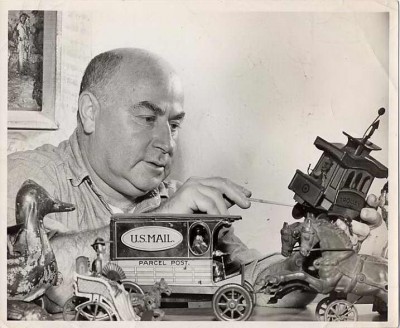 Edward (Eddie) Rosenfeld was born in Baltimore in 1906 and lived in Walbrook.  Eddie had two or three brothers and two sisters, but he never married.  Eddie’s father had a shoemaker shop on Baltimore Street.  Eddie had an early job as sign painter’s apprentice, and went to Maryland Institute College of Art for about one semester.  During the war, Eddie had a job in Washington, DC framing pictures.  Later, Eddie returned to Baltimore and rented and subsequently bought a house on Tyson Street before the house was renovated and the neighborhood was revitalized. He was long known as “The Mayor of Tyson Street” due to the regentrification of Mount Vernon that Rosenfeld was integral in initiating in the 1940s. A group of artists including Carl Metzler, Aaron Sopher, Reuben Kramer, Jacob Glushakow & Eddie would meet regularly there to paint and critique each other’s work.  Eddie was also a part of a weekly lunch group with Jim Brady, Donald Proctor, and Dr. Neustadt, who met at the Belvedere Hotel or Rosenfeld’s house.  Rosenfeld’s works are owned by many known repositories of art, including the Jewish Museum of Maryland, the Baltimore Museum of Art, and the Phillips Collection. When Eddie Rosenfeld died in 1983 he donated his body to science and was subsequently buried in Spring Grove Cemetery.

Series I. Documents contains scrapbook materials that Rosenfeld gathered both about his artistic career and about his Tyson Street neighborhood.  Further notable inclusions are several sketches by Rosenfeld, a drawing by Jacob Glushakow, and a print by Jane Dwyer.

Series II. Photographs (housed as MS 57 Box 3) contains photographs of Edward Rosenfeld, his mother, family members, his paintings, his work with the Equal Opportunity Commission, his childhood home in Walbrook, and his home at 913 Tyson Street.  Folders are arranged alphabetically by folder title.